No other train fired the imagination of the American public like New York Central's 20th Century Limited. Its exclusive clientele and blistering schedule between New York and Chicago made it the stuff of legends for 65 years. A favorite with business and industry leaders, its luxurious accommodations - including a red carpet on the platform at New York - also attracted stars of stage and screen, further fueling the train's celebrity status and romantic image.

New equipment finally arrived from Pullman in 1948, supplemented by refurbished 4-4-2 sleepers and RPOs from the 1938 trains. Painted in a new version of the two-tone gray scheme, sleepers and observations were named for various bodies of water in salute to the "Water Level Route" slogan. Up front, matched sets of EMD E7s provided 4000 horsepower to meet the 16-hour westbound, 15-1/2 hour eastward schedule.

Like the prototype, Walthers 20th Century is "Completely New from Diesels to Lookout Lounge!" And best of all, you can build a complete and affordable Century fleet, from the Phase II EMD E7 diesels to the train's signature "...Creek" series observation-lounge.

In addition, these First Edition models include a special certificate of authenticity, and an in-depth history of each car and loco! Plus, we'll also be offering a one-of-a-kind figure and accessory set, based on the classic publicity photo that defined Century elegance at its finest, complete with eight hand-painted figures and accessories, plus a 12" long reproduction of the famed red carpet rolled out for passengers as they boarded this flagship train!
--www.walthers.com

These two photos were provided by Dr. Andrew W. Panko of Niagara-on-the-Lake, Ontario. The scenes are roughly based on the Canada Southern (CASO) crossing of the Toronto, Hamilton & Buffalo (TH&B) in Southern Ontario. 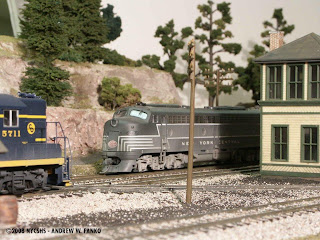 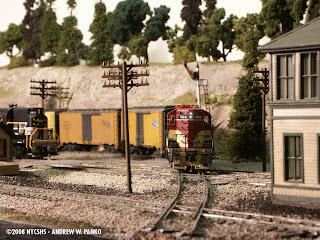 The Medina Railroad Museum suffered extensive damage Thursday evening when lightening struck its historic brick chimney. Caretaker Roland Holler was standing in the front depot entrance near the ticket booth when he heard a loud explosion, reports museum volunteer and technician Dave Moore. The chimney, located on the section of roof above Holler’s head, was instantly blown to pieces causing a blow out of the alarm system and surveillance cameras. No one was injured in the incident, although the building’s live-in cat, visibly shaken, scampered to find a safe hiding place and didn’t emerge for six hours, Moore said. “The strike was so powerful ... (that) it actually shook the building,” said Marty Phelps, the museum’s owner and director.

Read the rest of the story here.

From Tom Stage: "I'm not sure if the NYC ever used any of these particular coaling stations on their system. However, I would be very delighted to find out if they did, and where they were located. At 4 inches tall, the Suncoast Models Coaling station does make for a nice-sized coaling station for a small-sized fueling facility. Most of the other commercially available coaling towers are at least 11 inches tall and compete too much with the overall "skyline" of a small layout like mine."

The prototype FM coaling tower, in use on the Missouri Pacific: 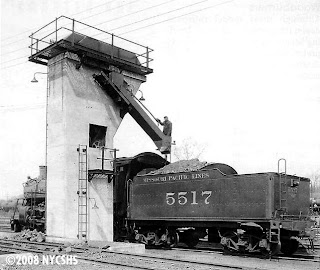 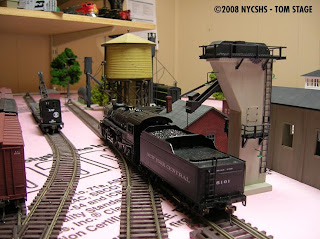 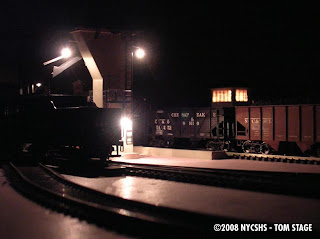 This colored, full-bleed postcard is from the collection of Bill Strassner. How many details can you spot?