Central Headlight Q 2011 is in the mail! 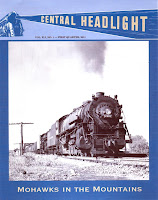 The latest issue of the Central Headlight is in the mail and on its way to current NYCSHS members!

Here's a quick recap of lead stories covered in the Central Headlight from 2007-2010. In first quarter 2007, we brought you the story of the the Empire State Express. We then took a look at New York Central's early EMD E7's in "The Beauty Queens" printed in second quarter 2007. Number board collectors would be interested to read about "Steam Locomotive Number Plates Carrying the New York Central Oval" in third quarter 2007. We closed out the year by heading up to the North Country with "Oil Burning Steam Locomotives in the Adirondacks."

The first issue of 2008 contained the story of Charles A. Erler in "Portrait of a Railroad Man." We remembered "The First Trip of the Empire State Express" in second quarter 2008. In third quarter 2008, we examined the tumultuous battle for control of the railroad when "Robert R. Young Takes Aim at New York Central." We wrapped up 2008 with an examination of "Rails West to Chicago."

Our first trip of 2009 took us "Commuting on the Harlem Division." The second leg of our trip took us to the other end of New York State with a visit to Buffalo Central Terminal. In third quarter 2009, we headed south to the P&LE and learned about its leader, "Papa John" (John W. Barriger). Tales from "The GE Rider" described the delivery of three new U25B locomotives to finish out 2009.

We started NYCSHS's 40th year with a profile of "Maurice E. Lewman, Railroader." Next, we satisfied our hunger by "Dining Aboard the Postwar Great Steel Fleet" in second quarter 2010. We put to rest the great debate by examining "New York Central in 1950 Railroad Industry" in third quarter 2010. We then took a trip to the Berkshires and beyond to examine "The Boston & Albany Railroad Stations of Henery Hobson Richardson" to close out 2010.

Thanks again to all of our contributors who have taken the time to share their knowledge and their archives with our members. Your efforts help preserve the history of the New York Central for future generations to enjoy and learn from. Did you miss an issue? Limited supplies of back issues are available for purchase. But you don't need to miss an issue, consider joining the NYCSHS today!

NYCSHS members get the current issue mailed to them each quarter! Not a member? Join today! Not sure if you want to become a member? Members and non-members can purchase back issues of the Central Headlight here. 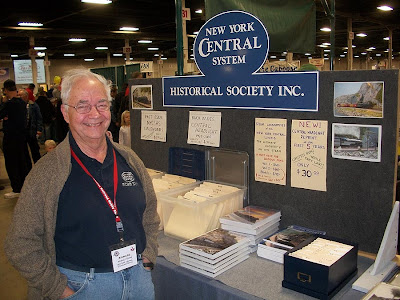 NYCSHS Central Headlight editor Rich Stoving was at Amherst Railway Society's Railroad Hobby Show in Springfield, Massachusetts on January 29-30. This show is one of the largest gatherings of railroad enthusiasts in the northeast, taking up four large exhibition buildings at the Eastern States Exhibition fairgrounds. With more than 20,000 in attendance, the show is excellent exposure for the NYCSHS. The show is a major fundraiser for the ARS, which supports their grant program that in turn helps fund restoration and historical groups around the region! Rich was manning the NYCSHS table and met many enthusiastic members and also managed to sign up some new memberships as well! Speaking of which, we're all looking forward to the Annual Meeting in Albany this April, only a few months away...  (Photo by Otto M. Vondrak)